I started a human mercenaries (Reiklanders) in anticipation of getting a few games in this fall/winter. I put them together out of a box of half built, half broken Free Company models I bought online (LAF maybe???). There is probably enough for a couple more warbands in there. 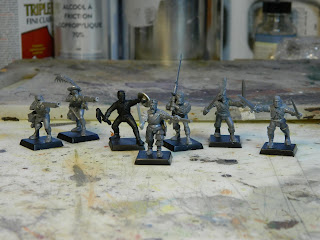 Heavy armour is generally poo-pooed in Mordheim but that is what the model comes with so...

Last night I detailed some of the bases. I probably should have peeled the figures off their bases and lay the flag stones down properly but with a bit of sand and wood around the feet, from table top distance, no one will notice... I hope. 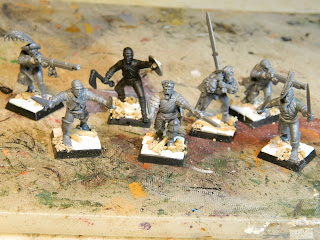