Although I have not been playing any games of Mordheim for some time now I had an opportunity to return to the desolate city this winter. With the requirements of a number of other projects fulfilled I entered the Lead Adventure Forum's Build Something Contest; the theme was Wreck and Ruin (you can't get much more Mordheim then that). Something that I had long planned on making was a ruined guard house so that was my subject. My build thread is here for those that are interested. 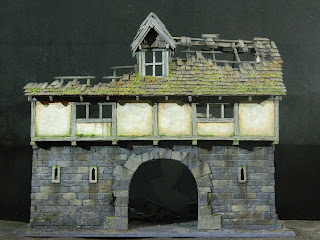 The building phase of the competition ran from Jan. 4th to Mar. 9th. Only WIP photos could be shown in the build threads; pictures of the fully painted projects could only be seen in the opening round. 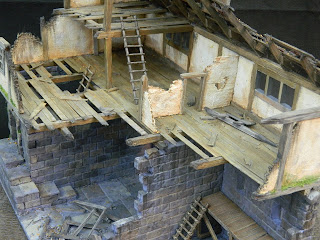 The competition portion ran through 4 rounds with participants going head to head and the membership voting for their favourite. 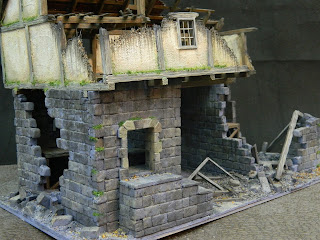 Although I started with Firedragon Games impressed styrodur for the walls and the floors, I tried a few different materials such as Polyblend's sanded grout/silicone mix for the daub. 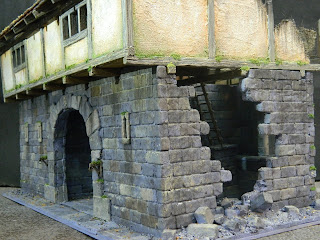 The doorway and the small windows and arrow slits were also from Firedragon games. As usual balsa wood and coffee stirrers provided beams and floorboards. 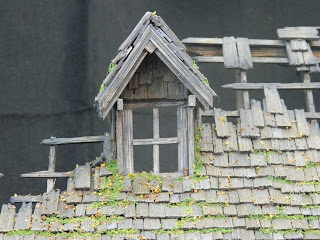 The roof construction was time consuming as I used doll house cedar shakes split into halves and thirds to shingle the roof. The dormer was a bit of an after thought and it kind of shows. 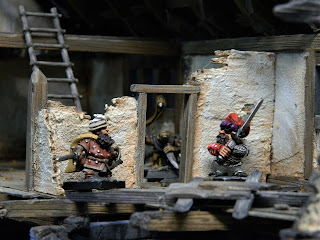 For the 3rd and 4th rounds photos submitted had to be with the terrain being used as intended: as a gaming piece. 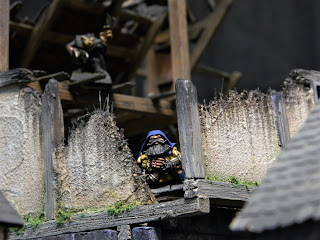 Although not necessary, I tried to include a new photo in each collage (the best way to submit an entry as you could show off the piece from different angles). 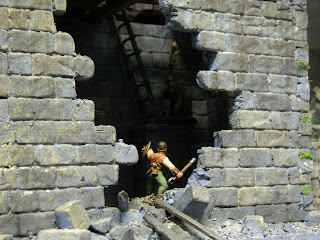 The following photo I never used and in the end I didn't need it. 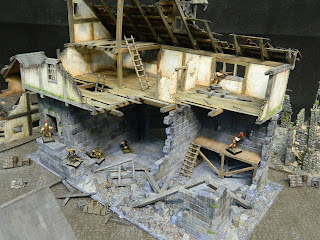 I have to say the project was a success as I ended up winning the prized potato, a very valuable trophy in these uncertain times, with the apocalypse looming on the horizon and all.... 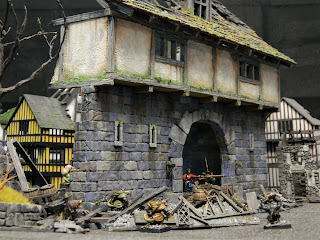 With the current health situation on going, when I get to actually use this piece in a game is a complete guess. The table and a couple of the other large buildings are still at a friends; I have no idea when I will be able to retrieve them...